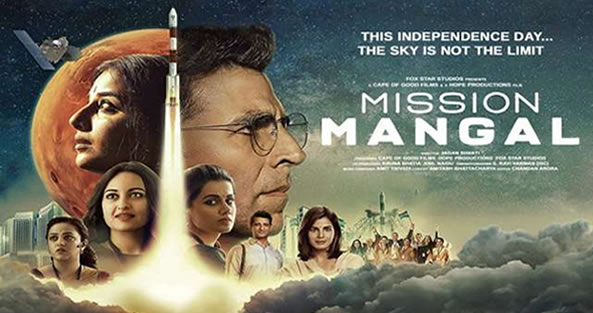 MOVIE RATING
Akshay Kumar’s Mission Mangal is based on India’s Mars Orbiter Mission and while the movie is a bit far from reality, it really is enjoyable. In 2014, The New York Times came under fire for a cartoon carried with an article titled India’s Budget Mission to Mars. The cartoon belittled the achievement. Indian citizens and media had responded then. Through Mission Mangal, the makers turn narrator and offer the viewers a sneak-peak into the life of those scientists who made India proud. The space drama is heavily fictionalised but strikes a chord with the spectators more because it celebrates the power to dreams.
The movie shows the difficulties and challenges faced by the scientists of ISRO to achieve this remarkable feat. India became the first country in the world to reach Mars in its very first attempt but, the journey wasn’t easy particularly after the failure of GSLV Fat Boy. But our scientists made it happen on a shoe string budget of just Rs. 800 crore.
Akshay Kumar is essaying Rakesh Dhawan, a genius scientist, who has devoted his whole life to ISRO. Akshay is a charmer and has lent his star power to the film. His character could have been written better nevertheless kudos to Akshay Kumar for letting the ladies take the center stage. Vidya Balan essays Tara Shinde, a scientist who also believes in the Supreme Power, despite being mocked by her son. It’s fun to see her optimistic character fight each challenge with ease. Taapsee has acted well in her limited role. Sonakshi is effortless and lively as Eka Gandhi. Kirti Kulhari and Nithya Menon too are effective in their roles. Sharman Joshi does remarkable act as a superstitious genius Parmeshwar Naidu. Veteran actor HD Dattatreya tickles you with his unique style. Sanjay Kapoor has played the role of Vidya’s hubby and he is a delight to watch. Dilip Tahil, Vikram Gokhale and Mohammed Zeeshan Ayyub have lent able support to the movie.
Outstanding performance by the star cast makes you sit at the edge of your seats. The USP of the film is its special effects. Everything looks very convincing and the makers need to be clapped for that. The movie's climax is filmy but what's captivating is that it's not a creation of someone's imagination.
In this film, the makers have taken a lot of cinematic liberties. Cinematography, CGI and VFX are effective, background score is fine and the film entertains one and all. The song, Dil Main Hai Mars, could have been avoided. Despite a few flaws, this movie is enjoyable, attention-grabbing in parts, have some really engaging moments.
In general, film Mission Mangal is worthy to watch once due to its entertainment quotients and some lovely performances.