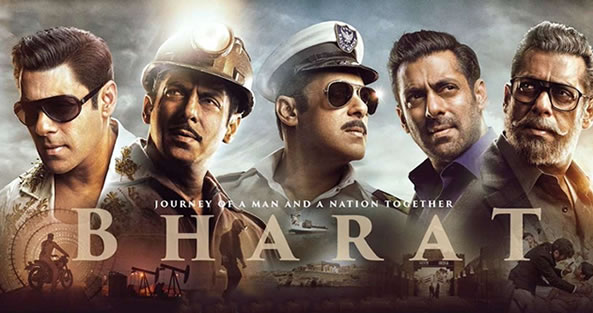 MOVIE RATING
Salman starrer Bharat is an official adaptation of South Korean drama Ode to my Father (2014). It focuses on the personal and professional choices of its main character, set against the social backdrop of its time. Director Ali Abbas Zafar and Varun V Sharma’s screenplay is effective and keeps audiences engaged from start to end. Bharat is a movie that will absolutely delight any Salman’s fan. It has all the elements that you wish for in his movie – action, romance, comedy and more.
About the story, film Bharat is about the journey of a man and a nation together. The story starts in 1947 in Mirpur village near Lahore. Bharat (Salman Khan) is a kid and his father Gautam Kumar (Jackie Shroff) dotes on him. This is the time of Partition and Bharat and his family are compelled to leave for India. At the railway station, Bharat is climbing on top of the train with his sister Gudiya (Barbiee Sharma) when she falls down on the station. Gautam has already managed to safely climb atop the train but he goes down to search Gudiya. But before that, he gives his watch to Bharat and assures him that he'll be back. He also tells him to go with his mother Janki (Sonali Kulkarni), brother and sister to Gautam's sister Jamuna (Ayesha Raza Mishra)'s shop, Hind Ration Store in Delhi. Bharat and his family cross over to India and thus go to the ration shop as asked by Gautam. They are quite poor and Bharat starts doing odd jobs. Bharat soon grows up as a dashing young man (Salman Khan) and he and his childhood friend Vilayati (Sunil Grover) join a circus. Here he comes across the sizzling Radha (Disha Patani). Both Bharat and Radha get into a relationship while also doing death defying stunts. However when Bharat realises his stunts might be influencing youngsters to do the same without proper training, he quits the circus. He goes to employment exchange where he meets Kumud (Katrina Kaif) and gets smitten by her. Bharat and Vilayati are sent to Middle East to work in the oil fields. The money is good but not as much as he expected to earn. Hence, Bharat decides to work in the dangerous underground mines. Kumud who is now in love with Bharat stops him from taking up the project since she's aware that the risk is quite high. Bharat however still takes up the work. All is well at first but 21 days later, an explosion takes place in the underground mine. It seems near impossible for Bharat and his other colleagues to come out alive. What happens next forms the rest of the movie.
About the star cast, Salman Khan acts well and looks convincing in his character. Salman’s extreme closeness to his real family (parents and siblings), makes him ideal to essay Bharat as he embodies his character’s traits, thus making it more convincing. Katrina Kaif’s act is remarkable with her natural chemistry with Salman Khan. She is opinionated and bold and she says what she feels. Sunil Grover does complete justice to his well-written role as Salman’s best friend and deserves more such significant parts. Sunil Grover as Vilayat who does a fantastic job. Sonali Kulkarni and Jackie Shroff are terrific as always. Disha Patni and Nora Fatehi are noticeable in their cameo type role.
Director Ali Abbas Zafar gives us a glimpse into the various eras of Indian history and he does it well. He also takes us through the phase when so many young Indians were going to the Middle East as migrant laborers due to the large-scale unemployment in India. The emotional sequences especially are quite well written. Ali Abbas Zafar and Varun V Sharma’s dialogues are simple and sharp, and even quite funny at places.
Overall, film Bharat is worthy to watch once for Salman’s heroic avatar with fun elements and a few heart-touching moments.