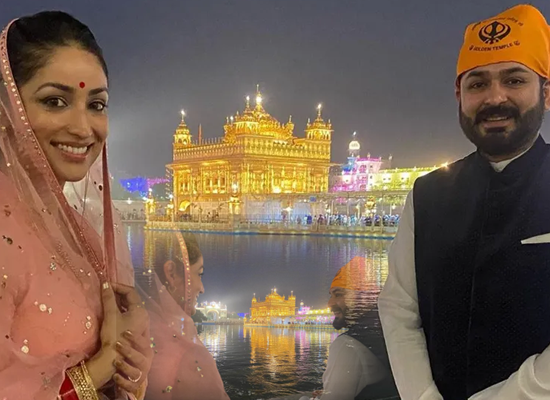 Recently, actress Yami Gautam has shared pics of her first visit post marriage to Golden Temple, Amritsar with hubby and director Aditya Dhar on social media.
On her Instagram handle, the Kaabil star dropped the pics from her first trip to Golden temple after marriage with Aditya. In the first pic, the two could be seen smiling at each other while Golden Temple could be seen in the backdrop. In the second photo, both Aditya and Yami could be seen posing for a special picture while standing at a distance from each other. Yami shared the photos with emoticons in her caption and in no time, they took over the internet.
The Badlapur actress is seen clad in a pink suit with a veil over her head. One can notice her red chooda in the photos and the bindi on her forehead. On the other side, Aditya is seen in a white kurta-pyjama with black bandhgala jacket.