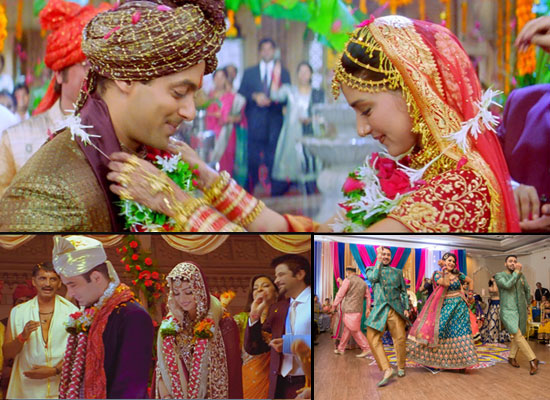 The west dreams of a fairy-tale wedding where the bride looks like a Princess. The east is inspired by Bollywood, where the couple lip syncs to choreographed songs. From glittering designer outfits to ornate jewellery (Jodha-Akbar), themed destination weddings to fun bachelorette parties (Zindagi Na Milegi Dobara), South Asian weddings in the GTA and Metro Vancouver are straight out of Bollywood, inspired by popular movies and music on TV, theatres, and even Google Home.
Big, fat desi weddings are integral to the South Asian culture, mostly among North Indians, even in Canada. They are not just a celebration for the couple involved but also the entire family. The bride and groom are introduced to near and far relatives, no matter how hard they are to spot on the family-tree. Friends, neighbours, co-workers, even the local MPP is invited, if they are on first name terms with the family.
In North India, where weddings are particularly extravagant, trends took flight from flamboyant to filmy in the late 90’s when iconic Bollywood blockbusters like Dilwale Dulhaniya Le Jayenge (DDLJ, 1995) took it to that level. The story of migrancy and displacement was perhaps one that struck a chord with the Indo-Canadian audience.
“My Canadian lifestyle has a huge Bollywood influence” — Henna Adatia
Henna Adatia, 28, a resident of Brampton Ontario moved to Canada with her parents from Amritsar in 1991, soon after she was born. Bollywood swept into her life at a young age and shaped her dream wedding.
“My Canadian lifestyle has a huge Bollywood influence, from learning my first steps as a toddler to dancing in my teenage years to the beat of Bollywood music,” she says.
“I grew up in the diversity of Mississauga, where desi aka brown culture was becoming the norm in the 90s. We lived with our grandparents who spoke with us in Punjabi and Hindi.”
Like many second generations South Asian Canadians in the community, Bollywood was part of her daily diet.
“Back in the early 90s, we watched whatever our parents were watching on TV in the family room. I grew up watching local TV channels such as Eye on Asia and OMNI-Bollywood Boulevard that typically aired three-hour long Hindi films, such as Kuch Kuch Hota Hai and Kabhi Khushi Kabhi Ghum. Not too many theatres screened Indian films then, apart from Albion Cinema in Etobicoke.”
Henna’s world changed with the introduction of satellite TV in their lives. “When “DISH” (replaced with Cable TV now) was introduced to desi households, we watched channels such as B4U-Music, Zee TV and others regularly at dinner time.”
She learned her first steps as a toddler from Indian film dances on TV channels and grabbed the spotlight in family weddings when she hit her teens. “I was dancing since I was a baby. I never took lessons. From dancing at weddings to talent shows in high school, I am a self-learner.”
The influence only grew with time. Her first date with the man who later became her husband, started with a Bollywood film. She knew they were on the same wavelength when he played Bollywood chart busters in the car and sang his heart out, “just like he was the lead actor.”
In July 2018, Henna married the man of her dreams with a meticulously planned “big fat desi wedding” that stretched over six days. “From a white-themed welcome party for guests to a Mehndi Ceremony in Morocco, peacock-themed sangeet (song and dance) ceremony to Choora and Jaago night, the glamorous rituals finally culminated in a grand reception.
“My wedding was as Bollywood as it could get. The entire family from both sides competed with each other, quite like the scenes in Hum Aapke Hain Kaun.”
The best was saved for last when the young couple performed a “filmy” number on the dance floor to remixes of current hits. “This was the best memory of our wedding. I’m so glad that Bollywood brought us that much closer.”
Over the weekends, Henna and her husband continue to listen to film music thanks to the TV channels and Google Home. “Even our Google Home knows how filmy we are,” and it knows just what to play to keep them entertained and connected to each other. “Indian films are apart of our heritage,” she says, crediting them for bringing her family closer to her in-laws.
The Urban South Asian Wedding Extravaganza — A Golden Opportunity for Businesses
Weddings are not just a social affair but a lucrative business for hotels, banquet halls, event planners, vendors and local businesses. The average cost of an Indo-Canadian wedding is said to be about $100,000. Many consider this wasteful and opt for simpler celebrations but for Punjabi families like Henna, it’s an opportunity to celebrate the culture they have grown up on.
It’s not uncommon to see over 500 to 1000 guests at a regular Indian wedding. Weddings showcase social status, hospitality, warmth and joy. A grand wedding is every South Asian mother’s fantasy where all effort is taken to invite anyone that remotely matters to them.
As Bollywood films break away from stereotypical moulds to women-centric “Sex and the City” like breakthrough formulas such as Veere Di Wedding and Zindagi Na Milegi Dobara that today’s migrants can relate to, and the media exposure increases with television channels like B4U Music and films churning out songs and films 24X7, the popularity can only soar with time.
Can Canadian advertisers and wedding vendors sense the big, fat opportunity in this?
This story by Joyeeta Ray is the third in the series exploring the increasing influence of Indian TV film and music channels on Canada’s largest ethnic minority demographic -the South Asian Community, and the investing opportunity that is waiting to be tapped there.
Source: https://medium.com/@joyeetaray/cable-tv-in-indo-canadian-homes-inspires-big-fat-bollywood-style-weddings-596dd035ae96