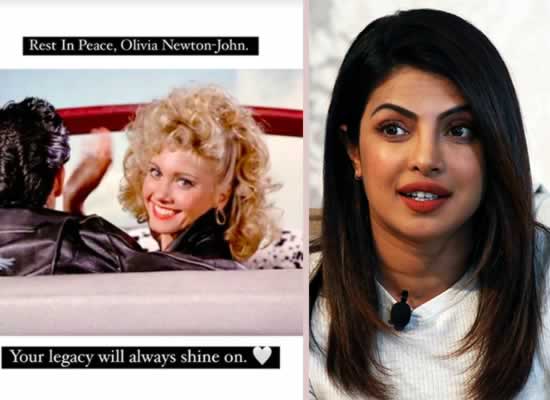 Recently, Grease star and multiple-Grammy awards-winning singer, Olivia Newton-John passed away aged 73 on Monday. The actress and singer battled breast cancer for some years. Her family pronounced the news of her passing with an emotional statement on Instagram. Numerous celebs took to social media to pay warm tributes to the actress.
On Newton-John’s sad demise, Priyanka Chopra took to her Instagram stories to share a heartfelt tribute to the legendary singer and actress. Sharing an old pic of Olivia Newton-John, Priyanka wrote, "Rest in Peace, Olivia Newton-John. Your legacy will always shine on."
The photo posted by Priyanka Chopra of the late actress happened to be a still from Grease, the musical that made Hollywood history. In the film set in the 1950s, had Newton-John plays the character of Sandy who has a summer fling with Danny, the "greaser" portrayed by Travolta.