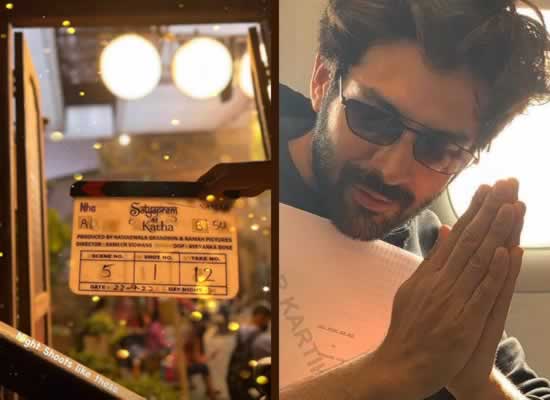 Now, Kartik Aaryan is one of the most successful actors in Bollywood. On screen, he enthralls viewers with his signature monologues. He enjoys a massive fan following with his great sense of humour. He was last seen in Bhool Bhulaiyaa 2 opposite Kiara Advani. The two actors will again be sharing the screen space in Sameer Vidwans’ romantic drama SatyaPrem Ki Katha and the shooting of the movie has already begun.
Recently, the Dhamaka actor took to his Instagram story and shared a glimpse of his night shoot as he films SatyaPrem Ki Katha. On his Instagram story, Kartik shared a pic of a clapboard which has the movie’s name written on it. He captioned the pic as, “Night shoots like these.” This movie is hyped to be a 'soulful musical love saga', Satyaprem Ki Katha is being directed by National Award-winning director Sameer Vidwans while Namah Pictures and Nadiadwala Grandson Entertainment are the co-producer. SatyaPrem Ki Katha is slated to hit the theatres on June 29th, 2023.