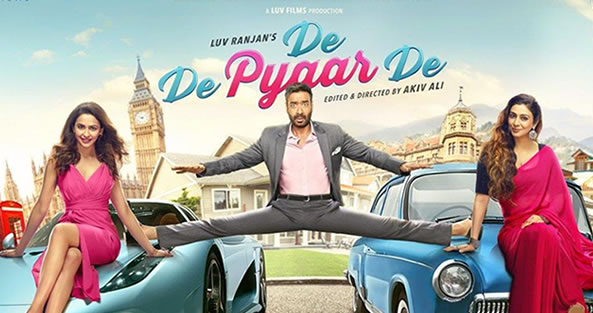 MOVIE RATING
Film De De Pyaar De is an amalgam of comedy and romance. The movie is an easy-breezy take on modern-day relationships and lives up to the expectations.
The film rotates around a 50-year-old investment broker, Ashish (Ajay Devgn) who is living in London after getting separated from his wife Manju (Tabu) and kids. Ashish then meets the hot and lively Ayesha (Rakul Preet), who is just 26, and they fall in love. One fine day, Ashish decides to take Ayesha to India to introduce her to his family and all hell breaks loose. What happens then forms the rest of the plot.
About the performances, Ajay Devgn is a fantastic actor and his comic timing is remarkable. Ajay Devgn is essaying his age and having the last laugh, even as he lets the audience laugh at him for being frequently called Buddha and ‘Uncle’ in the movie. His chemistry with a young and bubbly Rakul Preet Singh doesn’t feel out of place. She praises Devgn’s suave charisma with confidence and glamour. Tabu is an acting powerhouse. Tabu is also noticeable with her simple performance and restrained expressions. Tabu’s comic timing is also visible. It was great to see her sharing screen space with Ajay after a long time. Rakul Preet is looking beautiful but, her act is OK. Jimmy Sheirgill is good in his special appearance. Alok Nath is fine in his role however, Javed Jaffrey has been wasted. Sunny Singh also has a distinct appearance in the movie and he is hilarious.
The movie is appealing and keeps you entertain in the all scenes. While the first half is all fun and romance, the second half has some emotional moments.  The treatment too is good. De De Pyar De deals with live-in relationships and the changing dynamics between parents and their kids.
The movie has been stretched a little and the needless songs. The tale could have been woven better to make an engaging screenplay. Luv Ranjan has tried to redeem himself with this movie by writing strong female characters. Cinematography and locations are also pleasant. Tale is not extraordinary but it’s a fun movie.
Overall, film De De Pyar De is worthy to watch once for its entertainment elements and good performances of star cast.