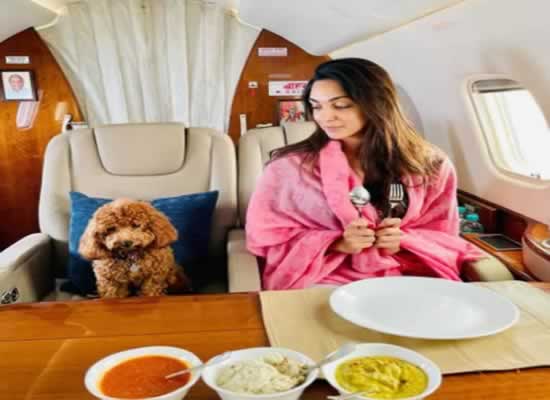 Presently, Bollywood actress Kiara Advani is one of the well-known talented actresses of Bollywood.  The 2016 film MS Dhoni: The Untold Story famed actress also enjoys a huge fan following on social media. Lately, the Fugly actress shared a pic with her RC 15 co-star Ram Charan's pet dog Rhyme on her Instagram handle.
Posting the pic on her Instagram, Kiara wrote, “One for the books! Best breakfast date ever was pawsomee. @alwaysrhyme.” She also posted it on her Instagram stories and captioned it: “Met a cute co-passenger today.” In the pic, she is seen sitting next to the dog, with food on their table inside a flight. Reacting to the pic, Ram Charan's wife Upasana Kamineni Konidela commented: "Omg this is the cutest. U really spoil her. She lovessssss u." Arjun Kapoor also wrote: “Couple goals."