Hrithik Roshan's intense look in beard and moustache for his next Vikram Vedha! Tue January 11th, 2022 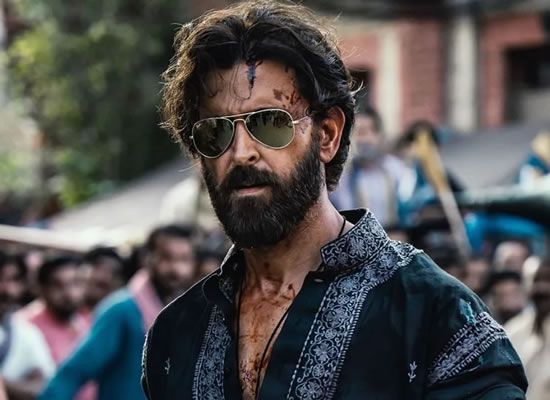 On the birthday of megastar Hrithik Roshan, good wishes have been pouring in from fans and celebs on social media. Earlier, the makers of Hrithik’s forthcoming movie Vikram Vedha had announced that they would be unveiling the first look of the actor as Vedha today. In shared first look, the Krrish actor looks terrific as Vedha.
Recently, Hrithik Roshan took to his Instagram handle to share his first look as Vedha. In the lovely pic that he shared, the actor looks intense and rugged in his full-grown beard and moustache. Wearing shaded sunglasses, messy hair with blood smeared on his face, Vedha has his own swag. The Super 30 star can be seen wearing a black V neck kurta shirt with an intricate design in white colour. Sharing this pic, Hrithik wrote both in Devnagri and English “वेधा. VEDHA.” Fans have showered love in the comments section the moment he posted the first look.
Movie Vikram Vedha also features Saif Ali Khan and Radhika Apte in a pivotal role, is a remake of the 2017 Tamil-language hit 'Vikram Vedha', directed by writer-directors Pushkar and Gayatri and starring R. Madhavan and Vijay Sethupathi. Pushkar and Gayatri are also making the Hindi adaptation.